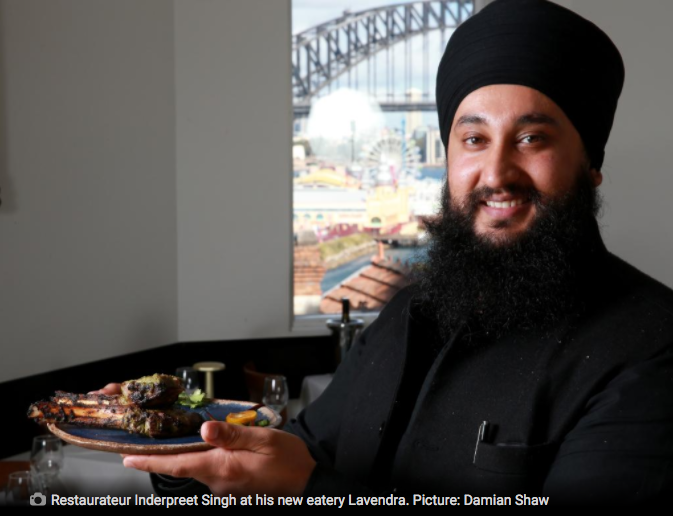 The Secret to tasty Indian menu

THERE’S nothing fresher than fruit from the garden. And when it’s harvested from one of Sydney’s most famous leafy enclaves it has an even sweeter taste.

Juicy cumquats grown just metres away are currently on offer and are paired up with lamb cutlets. “I approached Wendy and asked her as I’d like to use seasonal ingredients, third-generation restaurateur Inderpreet Singh said.

Whiteley said yes and a food fusion was born. Mr Singh plans to take the best of the season from the garden with Whiteley’s permission.

The pairing also goes straight to the heart of what he is trying to achieve at the family owned restaurant blending both his Australian and Indian heritage through food. “It’s unique Australian produce combined with traditional and contemporary

Indian cooking methods in order to bring out the best in our two cultures,” he said. “I’m finding the best combinations.

“Everything is very ingredients-focused. We bring out the best flavours of the ingredients using Indian cooking methods.”

Other highlights on the menu include salmon cooked in Malibu and coconut oil, and a korma dish using macadamia.

The most popular dish to date has been baby barramundi cooked in garlic, ginger and mint. “We leave it overnight and then slow cook it in the tandoor,” he said. “It results in a very nice crispy outside and a very tender inside.” The new North Sydney restaurant is in an iconic location on Walker St over-looking Sydney Harbour. Mr Singh comes with decades of experience as he grew up watching his father at Grace of India restaurant at Milsons Point.

For the menu he has hand-picked recipes from across India and matched it with Australian products. Favourites from Goa, Punjab and Chennai have all been given an Australian update. “It’s just amazing,” he said. “A lot of people come in and say they’ve never tasted Indian food like it.”